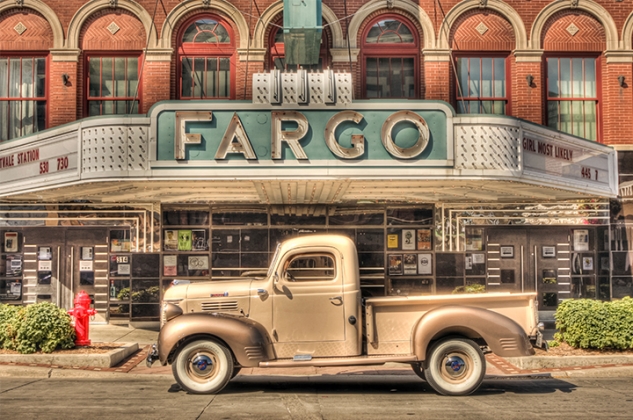 It was kind of a tradition: every time we watched an episode of Fargo (the TV-series) we swore we would never ever go to Fargo. The freezing cold, the endless flat – and boring – landscapes, the snow, the strange accent people talk with, and let’s not forget: the presence of some really weird and evil characters (yes Billy Bob Thornton, every time you show up something bad happens).

But you know, never say never and when 20th Century Fox invited us to write a travel-related post about Fargo – with the opportunity  to win a free ticket to Fargo – our curiosity was triggered. The timing was a bit off: they contacted us last week, a day before we were leaving for Istanbul. Today we got back – Istanbul is a fantastic city by the way! – and the winner of the Fargo-ticket will be chosen on the 29th of April, the day the Fargo DVD & blue ray will be released in Belgium (update: and we won, yeehaa!). But anyway: we’re big fans of the series and yes, now we’re intrigued by Fargo as a travel destination.  So here it goes: 5 reasons why you should travel to Fargo.

1. Fargo is a bit different

You think there are no interesting facts to know about Fargo? Think again!

2. Fargo is north of normal

The people from Fargo don’t mind being different, in fact: they cultivate it. The town’s slogan is  ‘north of normal’ and on the Fargo-website you’re welcomed by this little text: “You know it the moment you hit the ground. You can sense it in the air and feel it on the prairie wind. This place is different. Not like anywhere you’ve been before. It’s unfamiliar ground, but it is ground you want to spend some time on. Welcome to Fargo, a place that sets the bar far above the norm.” Admit it, pretty cool, no?

3. There are some surprisingly fun things to visit and to do:

4. There’s a lot of food, drinks and more

There are hundreds of restaurants, bars and other dining options to choose from in Fargo.

We’re really big fans of the series and if you haven’t watch it yet: you’re missing out of one the most unusual television series ever.