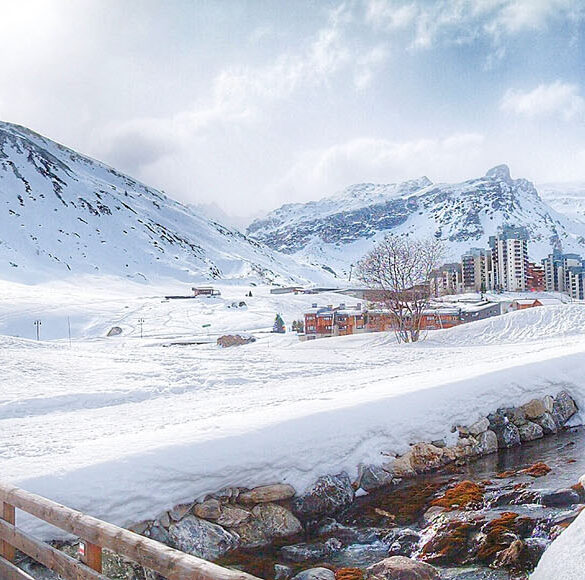 A sporty weekend in Tignes: from snowshoeing to off-piste skiing

Why should you go to Tignes? First of all: to ski your socks off! Tignes is known for being one of the most beautiful and extensive ski resorts in France and Europe. This is thé place the winter sport-lover desperate for a vacation filled with adrenaline, sports and good old fun in the snow.

Tignes and its neighbor Val d’Isère are good for some 300 kilometer spectacular ski-slops, known as Espace Killy (named after France’s Olympic skiing champion Jean Claude Killy).  Tignes is also one of the highest ski-resorts in the world, making it even possible to go skiing in summer, on the glacier La Grande Motte.

Jempi couldn’t have been more happier to visit Tignes; as an ex-ski instructor who hadn’t seen much snow the last couple of years, he was freaking out with enthusiasm to hit the slopes. I however was a bit in doubt whether there would be something for me to do during this short trip; I don’t ski and although our hotel was fantastic, I had no intentions to just stay indoors and do nothing. Not skiing doesn’t mean I don’t like sports or being active.

So the challenge was to find things to do we both liked. Curious what we end up doing? Here’s a little summary.

1. These boots are made for snow walking

While Jempi was getting his kicks on the ski slopes, I decided to try snowshoeing. “The weather is not excellent but you’re still going to love this,” my guide said when we were strapping on our snowshoes. I had to admit I was already a snowshoe-fan: no heavy ski boots, skis or other equipment to carry, no standing in queues at ski lifts, no crowds… True, those snowshoes were no Louboutins (it’s like walking with shoes on that are three sizes too big) and the views over the valley were a bit blurred by the fog, but it still felt good to be outdoors.

Bonus: walking with snowshoes is really easy; it took me less than 5 minutes to get used to my new plastic shoes.

Out little walk took 4 hours and it was pretty exhausting walking through the snow – continuously uphill and downhill again –  but it was just like I had imagined it: alone in a white landscape where there’s barely any sound, being blown away by the beauty of nature… I would have loved to enjoy the 360° view on top of the little mountain we climbed, but because of the fog all I could see was a white blur. But still: I was no longer a snowshoe-virgin and I definitely want more of this!

When they said dog sledding I thought we were going on a real adventure into the white wilderness, with a sled pulled by a couple of Huskies.

Turned out our dog sledding trip took place only in and around Tignes-le-Lac and on the frozen lake. So no wild nature or big adventure. Was that a disappointment? Well, it could have been, but the dogs were so funny and the instructor was really great. All we had to do is cuddle the dogs, sit in the sled and enjoy the ride.

Would we like to try ice diving? Euh, yes, sure. So there we were, feeling very uncomfortable in our special ice diving suits, looking at a hole in the ice, wondering whether this was a good idea. “It’s going to be fine”, our instructor from Evolution 2 said, and after a short but thorough safety brief we just took the plunge.

Was it cold? Yes! Was it something amazing? Absolutely! Don’t expect any encounters with fishes like you would when diving in the Red Sea, but the lights and colors under the ice are breathtaking.

“I just want to die. Leave me here and let me die.” All Jempi could do when he got back from his first time off piste skiing experience, was to crash on the bed and just lay there. “I’ve never been so tired”, he moaned.

Although it had been nine years since Jempi actually went skiing, his guide had found his skiing level and his physical condition good enough to try off piste skiing. After putting on the full equipment (avalanche transceiver, avalanche air bags, shovel…) and a short warming up on the regular pistes, the two of them headed of to a steep off piste pitch.

“Why did you let me do this? I had to climb up a mountain, for miles! I was knee-deep in snow, I fell so much my butt is bruised. I’m exhausted. Snow is evil and unforgiving, it’s the Devil’s invention, I finally realize that now.”

All I could say was “Ow, really. Hm, who knew…”. I had just finished my first try on snowshoeing and was still in an zen-like state of mind, my head filled with memories of nature’s beauty.

Things to know when visiting a school in The Gambia

“Ow no,” he said. “I loved it! It was the most brilliant and amazing thing I’ve ever done. The mountains, the fresh snow, the silence, the feeling like you’re one with nature… Pure magic. Skiing down a mountain in the fresh snow, in such an amazing landscape… heaven!” And then he closed his eyes. Not to die of-course but to sleep, just long enough to load up his batteries before we had to hit nightlife in Tines.

If you’re into off piste skiing you’ll definitely get your kicks in Tignes; the resort boasts a variety of off piste routes, both within the resort and in the back bowls. You can book a guide to go with you, individual or in group. Lessons are also available.

4. Things we didn’t do, but should have

Our time in Tignes was too short to try everything, but these activities will definitely be on our agenda during our next visit:

I don’t know who invented this thing, but he or she should get a medal. Think of it as a combination of ramp jumping, bungee jumping and zip-line riding. Just watch the promo video below, and I’m sure you’ll be hooked too.

Tignes is located in the Tarentaise Valley, a Savoie department in the Rhône-Alpes region in south-eastern France. It has good transport links in and out of Lyon, Geneva and Chambery.

The resort is know as a Walhalla for snow-sport addicts, but Tignes is also a great destination for an active summer holiday (with lots of free activities and free lifts).

More about where we stayed in Tignes here and our ice diving adventure.