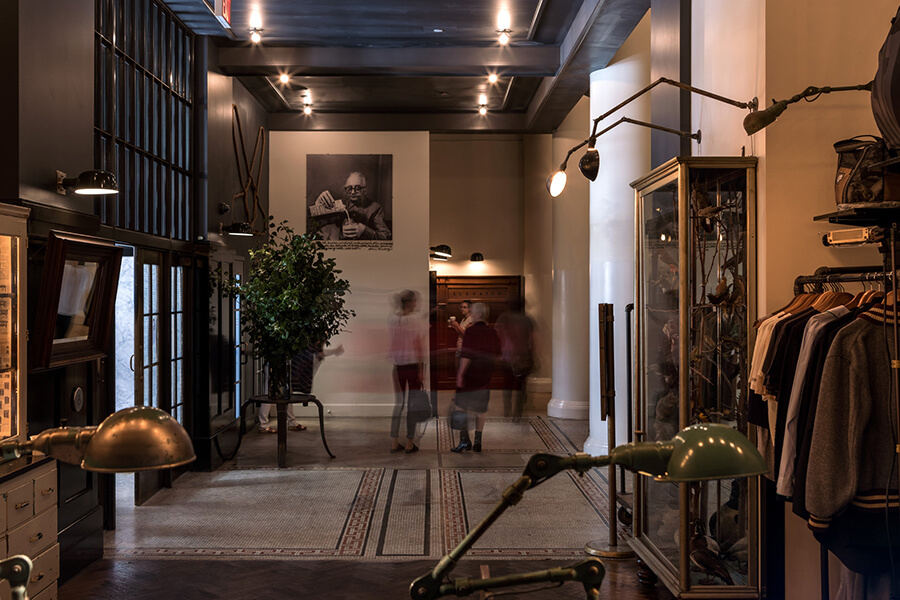 Staying at the Ace Hotel New York:  were we cool enough to dig it?

Going to New York and staying at the famous Ace Hotel, how cool is that? Pretty cool it seems: I had heard so many things about this hotel – good and bad – and was curious how the place would suit us. The Ace Hotel is supposed to be a temple of coolness filled with urban vibes and tons of hipness. Apart from all the hipster-hysteria, the Ace Hotel has also a story to tell.

Okay, hipster. Moi? Not really. I do love new trends and all the cool stuff, but I also tend to get easily bored with all that stuff: hipness becomes mainstream very quickly, which is just fine but don’t just follow along just because you think you have to. For the record: just being your authentic self, no matter what’s supposed to be hip and trending, sounds already pretty cool to me.

Now the Ace Hotel is known for being a true hipster heaven for the 30-something crowd , a boutique hotel especially designed for the cool & modern folks. So the big question was: could the Ace Hotel hipsterdom be too hip for us?

The story behind the  Ace Hotel: from Seattle to the rest of the world

In 1993 he had already started Rudy’s, a Seattle chain of retro barber shops. Later – with partners Wade Weigel and Doug Herrick – he opened the first Ace Hotel in 1999 in Seattle. The hotel offered budget shared-bathrooms next to luxury suites, a place for both the budget and the luxury traveler (hence the name: in a deck of cards the ace is both high and low. Ace was also Calderwood’s childhood nickname).

Alex Calderwood had a great talent to spot trends, a man with a vision who never stopped working (and playing). Unfortunately he didn’t live long enough to enjoy his success. In November 2013 he was found dead in his room in the Ace Hotel in London, just six weeks after the hotel opened. He was only 47, his death was unexpected, the cause was unknown. You can read up on Alex Calderwood here and here.

In most cases hipster hotels turn up in an up-and-coming neighborhood where creative new shops, galleries, artists and models are settling in. These hubs for the hipsters are always very pleasant to stay, because of the vibrant ambiance. The downside however: such neighborhoods also tend to be a far from the city centre and main attractions. Ace Hotel New York however is extremely central located in Midtown Manhattan (on Broadway and 29the Street) , a neighborhood known as NoMad (north of Madison Square Park) with just about everything right at its doorstep. Subways are near (5 minutes ride to Times Square), Madison Square Garden is a 10 minute walk away, the Empire State Building is close by… the perfect location is you’re planning to do some hardcore exploring of Manhattan.

Ace Hotel New York is situated in the former Hotel Breslin (a 1904 building) and has been thoroughly renovated without loosing its charm. In fact, a lot of the vintage and retro feeling was added by Roman and Williams, the celeb interior architects who redesigned the place. The didn’t strip the interior of the building, but added colors like grey, black and white en used smart decorating to change the appearances of the rooms.

Many of the rooms come with vintage turntables and a good collection of vinyl (so how hip is that), a guitar placed in the corner, a shiny Smeg fridge (stocked with juices, water, beer and champagne, but be aware: prices for the minibar are very high), a retro bathroom, wool blankets on the bed, flea-market-inspired furniture and a big flat-screen TV.

There’s a room for every budget: from bunk (cheap) to super deluxe suites (expensive). All the rooms look different, thanks to the graphic art prints on the wall. The overall feel is very urban, vintage, masculine and very industrial.

We had a medium room and were very surprised by the size of it: really large, considering this was a NY-hotel room.

What we didn’t like: we found the room a bit too dark, even with all the lights on. And the high price of the mini-bar.

Things we liked, apart from the size of the room: the industrial and vintage design, and the extra goodies like gluten-free beef jerky, ramen noodles and a ‘fun pack’ with socks, condoms, breath mints, pain killers and other ‘essentials’.

Bonus: the shampoo, conditioner and body wash you’ll find in your bathroom are all from Rudy’s Barbershop, located next to the hotel and part of the Ace.

The lobby & everything else

Connected to the hotel is the Coffee Shop Stumptown (good for a serious espresso) and the Breslin (a gastropub  by Michelin-starred British chef April Bloomfield), perfect if you’re feeling hungry and/or thirsty and you’ve already emptied the inside of the Smeg in your room.

The lobby is a cool hang out, designed like an antique library with big comfy couches and of-course: open wi-fi. No wonder it’s always (like: every hour of the day) packed with hipsters, writers and young professionals, looking for a relaxed place while working their Macbooks. Very nice if you want to do some work yourself, but as hotel guests we sometimes felt we were sitting in an office instead of a hotel lobby.

At the night, the ambiance in the lobby changes into a more nightclub-feel, with a crowd ready to hit the nightlife of the city. The Lobby Bar (best cocktails in town!) is a fantastic place to start (or end) your night on the town. Extra fun factor: there’s a cute little photo booth available, cool no?

Unfortunately, the lobby was also – like our room – really dark, even during the day. While New York was bathing in sunshine, inside it felt like the night never ended, we called it ‘the big black hole’, there was just too much darkness going on.

First of all: the staff is fantastic. People were super friendly, helpful and made us feel right at home. Of-course they all look super cool with their beards, tattoos and distressed jeans and vintage sneakers. And they were big fans of the tattoo’s Jempi has, so big bonus. 🙂

While hipsters are raving on about the ‘cool’ vibe of the hotel, we found the Ace Hotel New York down-to-earth, fun, friendly and laid back. And dark, the hotel could definitely do with a few more lights. If you’re a hipster, this is your place to be. Not a hipster? Don’t worry, you’ll fit right in as it turns out that just about everyone is cool enough for Ace Hotel.

Tip: if you’re planning to stay at Ace, ask for one of the higher rooms facing 29the street: these have great views of the Empire State Building.