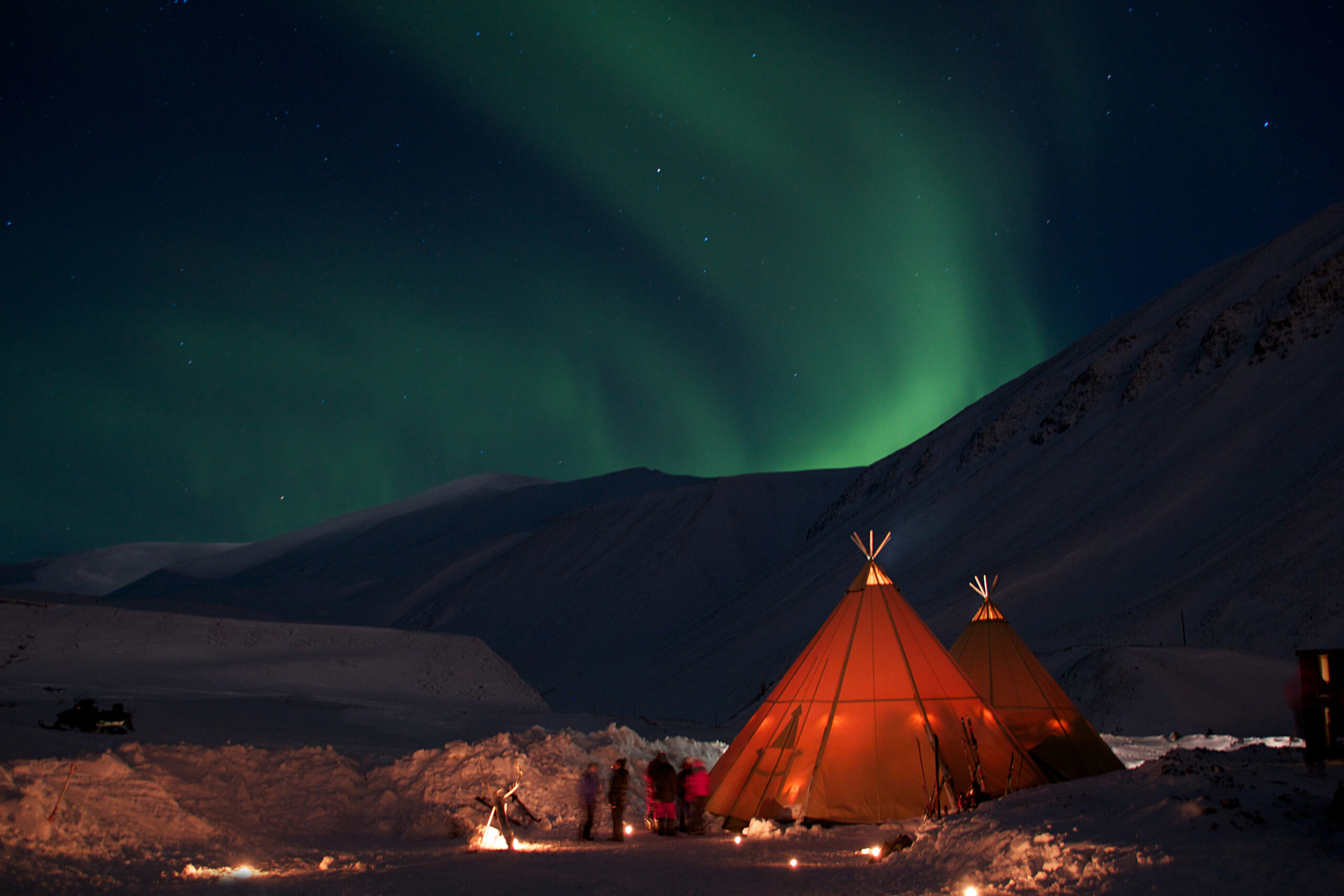 The best place in the world to chase the Northern Lights

The closer to the North Pole, the faster the geomagnetic activity (which causes the Northern Lights) and the bigger the change of enjoying this beautiful light show. Svalbard (formerly known by its Dutch name Spitsbergen) is a Norwegian archipelago located in the Arctic Ocean, less than 1200 km from the North Pole. Since the slightest bit of geomagnetic activity causes the Northern Lights in Svalbard, it’s even possible to witness the lights during the day, which is quite unique.

Mind you, we’re talking daytime here, not daylight; from mid November to late January the sun doesn’t rise at all so it remains pitch black in Spitsbergen, it’s the so called polar night. During these dark months you have the best options to also see the northern lights during the day; this daytime aurora creates a different color palette and is an absolute must see.

Okay, I hear you: “During the winter it’s always dark so there’s nothing to do?” Think again: Svalbard offers a whole range of unique winter activities, which have a magical dimension due to the aurora borealis. So here are some suggestions:

1. Go on a snowmobile safari

Most activities start from the capital Longyearbyen. The easiest and most efficient way to traverse the city and its natural surroundings, is by snowmobile (there are only a few official roads on the islands).

Fancy driving a snowmobile yourself? No problem; Svalbard Booking organizes daily snowmobile safaris. You’ll be driving through the most beautiful white landscapes and there’s a big chance of spotting reindeer, foxes and polar bears. And best of all: the guides will lead you to remote places where you can spot the Northern Lights, surrounded by unspoiled nature.

Real daredevils can also hire a private snowmobile and explore the area by themselves. But: this is not without risk.  You should in fact always be prepared for polar bears. For specific rules and more information, have a look at www.sysselmannen.no.

A little less G-forces than riding a snowmobile, but still good for a lot of fun and adrenaline.

The dogs and guides from Green Dog Svalbard and Svalbard Husky will lead you around four hours through the beautiful landscapes of the archipelago, illuminated by the stunning Northern Lights. A magical and pure experience!

During this husky tour through the arctic wilderness you will encounter many glaciers, frozen fjords and maybe even polar bears.

3. Experience the magic of an ice cave

During the cold winter months you can visit some spectacular underground ice sculptures. The ice caves look different each year as they melt during the summer months and take on different shapes when they freeze again the next winter.

The guides from Svalbard Wildlife Expeditions will take you on a tour inside the ice caves to witness this extraordinary natural spectacle. Expect entering another world, filled with numerous ice formations and blue and white colors. Expect to climb and crawl over the ice to explore this labyrinth of ice, but it’s so worth it!

How do I get there, where do I stay?

Although Spitsbergen may not be the most obvious travel destination, it’s still quite easy to get there. There are daily flights between Longyearbyen and the mainland, via Oslo and Tromso. You can book via SAS (www.flysas.be) or Norwegian Airlines (www.norwegian.com).

Almost all the hotels are located in Longyearbyen and meet the western standards. You can also stay in Barentsburgs (the only remaining Russian settlement in Svalbard) or Pyramiden (a Soviet ghost town).

For all information about hotels, local tour operators and activities: www.visitsvalbard.com.

And specific for Belgium: for fully organized tours you can contact www.nordic.be and www.gallia.be.