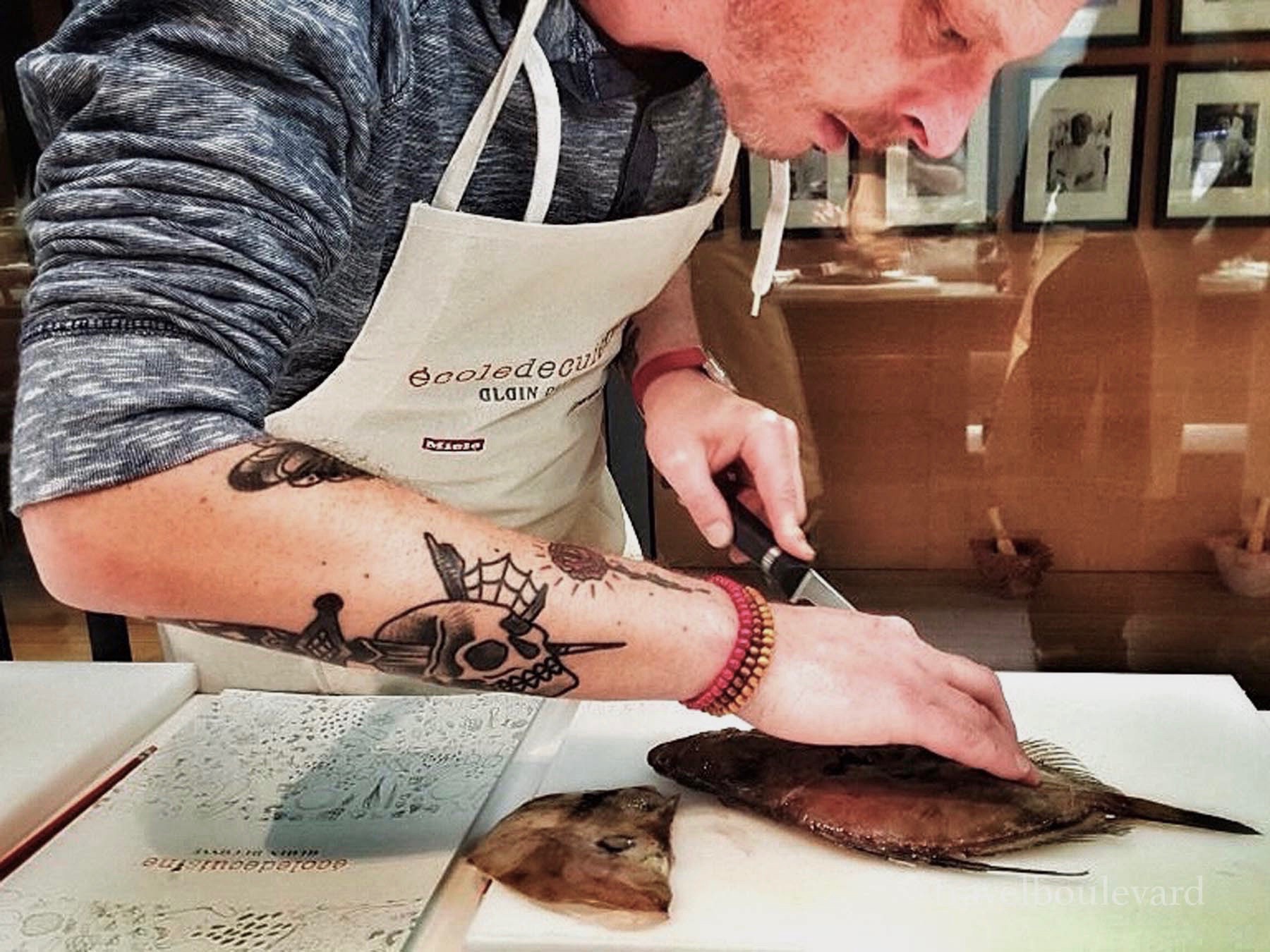 Paris for foodies in 7 tasty tips

Paris is always a good idea, and if you love exquisite food and gastronomy you even have an extra reason to start packing for a tasteful stay in the city of light. During our last visit to Paris we stumbled upon some fab gastronomic gems and it would be a shame not to share these with you. So here’s our post Paris for foodies in 7 tasty tips. Bon appétit!

Delicious Paris was the name of the press trip we were invited to. Consider this: 3 days to enjoy the best of culinary Paris, from Michelin star gastronomy over dinners at locals and workshops. And the cherry on the cake: attending an official ceremony at the Paris City Hall where Mayor Anne Hidalgo treated France’s top chefs to an award.

These 3 days were packed with visits and events and to  keep it entertaining for everyone, we’ve created a list of must-do’s if you want to have a taste of Paris. Hopefully this will inspire you to pack your bags and discover these delicious treats yourself.

1. Have lunch with Pierre Sang

Pierre Sang became a huge celebrity in France after his participation in the second season of Top Chef France in 2011, a tv contest where young chef’s compete with each other for the title of best chef of the year. Pierre did not win the contest but with his original creations and very charismatic personality he gained the respect of the public and evolved to become a well-known and successful chef. His restaurant is absolutely a must-do!
Make sure to reserve your seats and enjoy a unique clash between French and Korean cuisine.

2. Explore the city with a Citroën 2CV le deux cheveaux

Okay I agree, this has nothing to do with food but cruising in Paris with these typically French cars was so much fun that it deserves a highly recommended badge! Not only do you get to see the city in a cool and relaxed way, but the driver will fill you in with lots of interesting and insider only tips.  So how cool is that?

Several routes are available. You can book them through the website:

3. Master you cooking skills at the Alain Ducasse Cooking School

And then it was time to prepare some food ourselves and run the pass during a workshop at Alain Ducasse Cooking School. Alain Ducasse is THE French god of food and the first chef who has restaurants in 3 different cities, with each of them 3 Michelin stars! If this doesn’t blow you of your socks: in total he owns more than 20 restaurants with a total of 19 Michelin stars…ding dong! I think we can safely assume that this man is a food-genius.

Our goal was to prepare a delicious fish dish and without exaggeration: my first Ducasse creation was enthusiastically appreciated and njamie (read: yummy). Yeahaaa for Jempi 🙂

There are workshops for every level, whether you’re a beginner or a pro. You can also learn how to taste wine, how to make the most delicious pastries and there are even special classes for children.

4. Have dinner with the locals

Dinner with Parisians is one of the concepts from VizEat, an organization that offers unique dining experiences in cities across Europe. The purpose of this concept is to discover the city — and its culture — in an original way, off the beaten track. 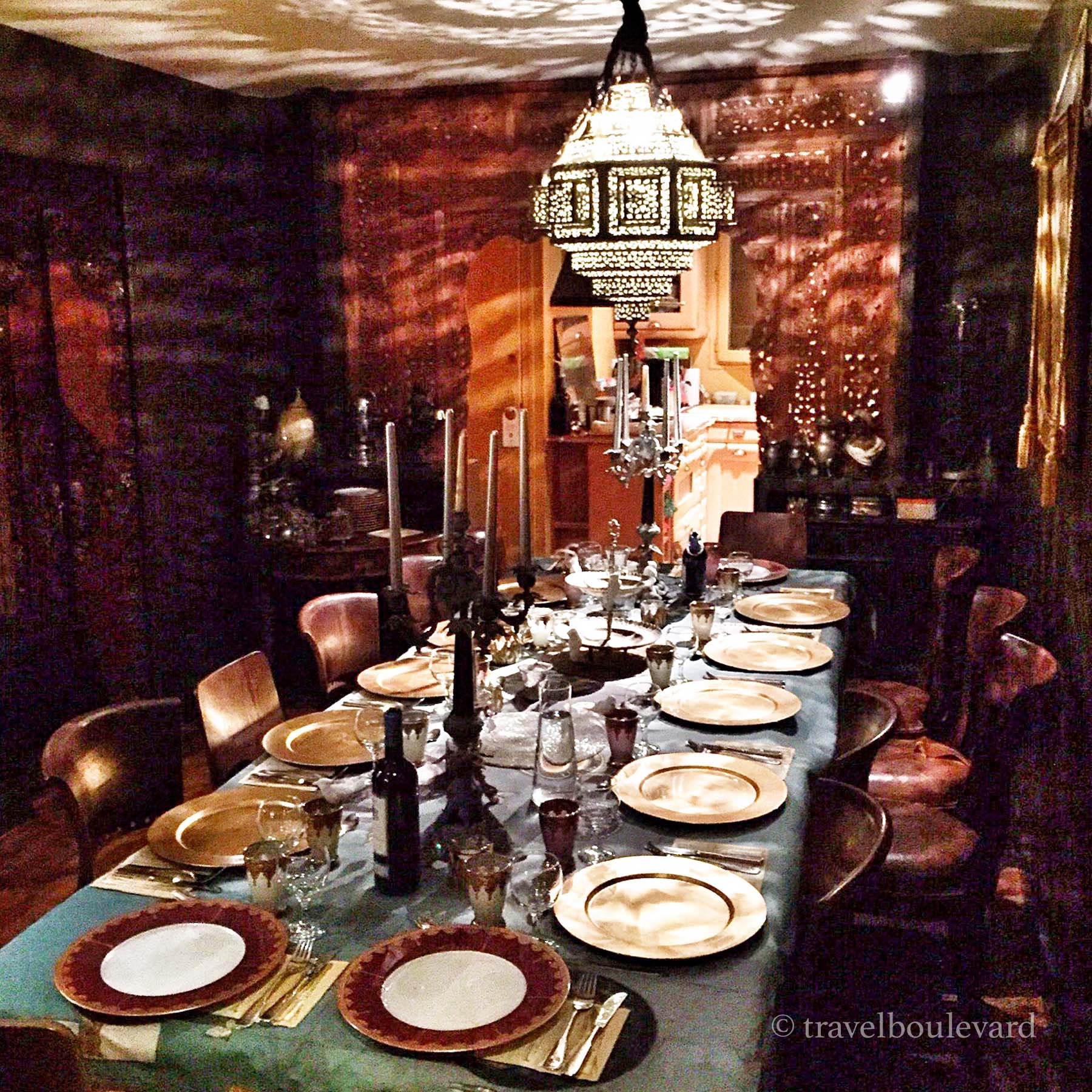 Did it work? Yep, it sure did!

Our date of the evening was Diane, a very nice and talkative Parisienne who is very passionate about bees and even has her own beehive on the rooftop of her incredibly nice apartment. We had a fab dinner and a great evening, and we highly recommend you to book yourself a seat and enjoy a cozy dinner with Parisians.

5. Eat what the locals eat

Dinner at Diane’s home was definitely a blast and lucky me because the food feast wast over yet. The next day we were invited to experience authentic Paris during a walking tour organized by Meeting the French, an initiative established in 2005 by some enthusiasts who like to show and promote the real Paris, seen through the eyes by locals.

You can book several tours and workshops and there are a variety of themes. We joined the food tour through the Les Halles Montorgueil district, also known as the belly of Paris (at least, according to French author Emile Zola in 1873).

So what was it all about? Think: interesting markets offering all kinds of products, a high amount of delicious food stores, hidden food gems, some of the best local product restaurants and the pastry baker Storer, known as the best pastry baker in Paris.

6. Have a fancy diner at La Grande Cascade

Time to put on your suit (or fancy dress) because we’re heading to the famous La Grande Cascade in the heart of Bois de Boulogne. 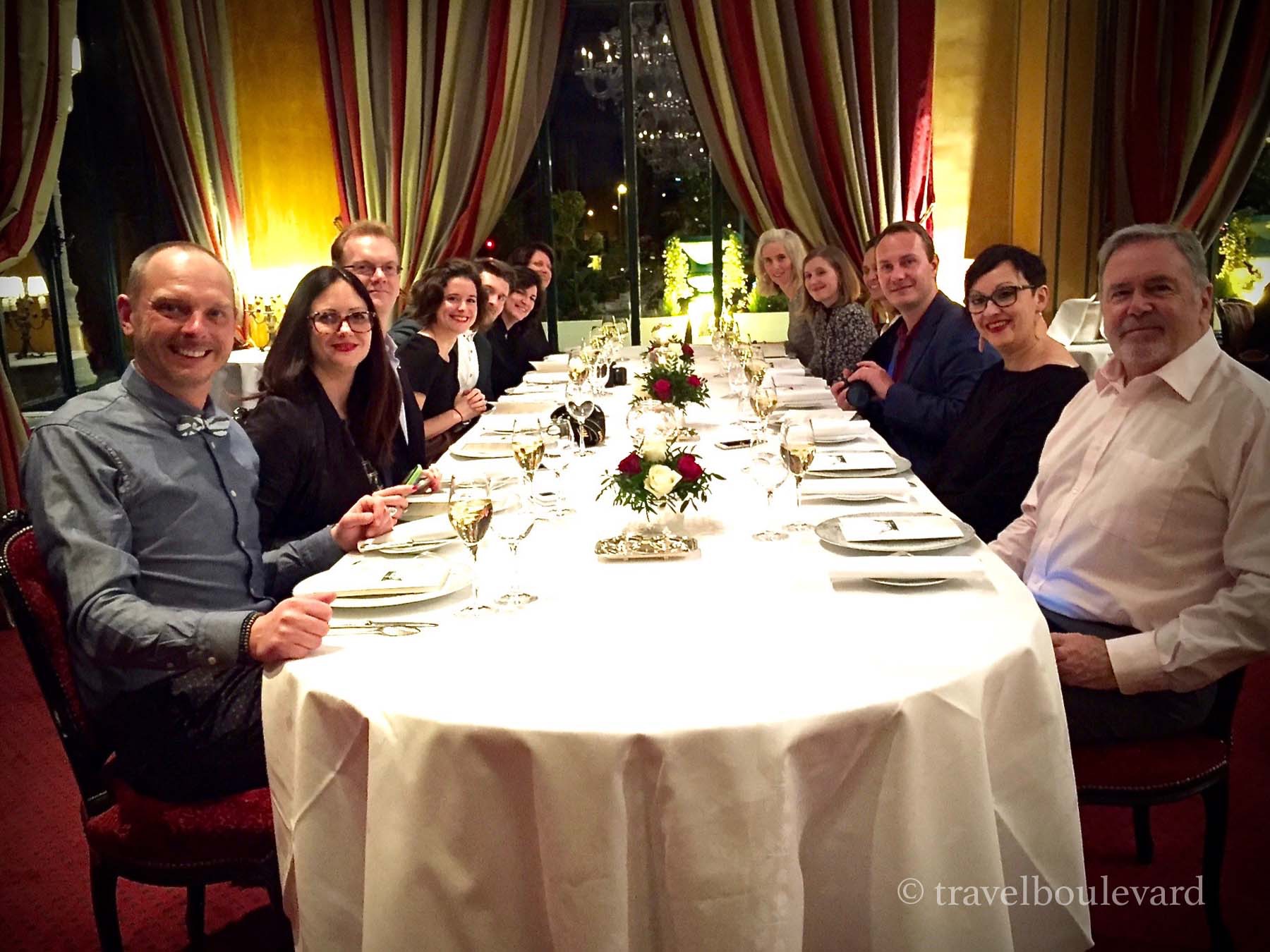 Besides exquisitely prepared gourmet food — chef Frédéric Robert is awarded with 1 Michelin star — you will definitely fall in love with the setting! La Grande Cascade hasn’t been a restaurant; the pavilion was originally built for Napoleon III as a place to rest when he was hunting in Bois de Boulogne.

The interior of this restaurant is everything you would expect from a location like this, a kind of grandeur that makes you happy and feel right at ease. Chef Frédéric also translates this grandeur and happiness on the plates he serves, with fresh and carefully chosen products, prepared and served by the highest standards.
Conclusion: highly recommended!

7. Visit Rungis, the largest food market of the world

After a heavy and very pleasant night in Paris (no, we couldn’t get enough of those French wines and cocktails!) we had an early wake-up call (at 4 am!) to visit the Marché de Rungis, Paris’s early market and the largest food market of the world. Just imagine yourself: an area of 32.38 km2, with 13,000 people who work there and 26,000 trucks a day to supply and/or take away food from all over the world.

One day in Verona: 5 top things to do

Our first stop was the meat district. Not really the best choice if you have a bit of a hangover from the night before; the halved carcasses, hanging guts and baths full of livers, cow heads and the smell of dead meat… this can pretty much make your stomach turn.

To be honest,  I didn’t find this meat-visit amusing, and it had nothing to do with the hangover, there were just too much dead animals. I know it sounds pretty hypocritical because I rarely say no to a nicely prepared piece of cutlet or a steak. But I must admit:  since my ‘confrontation’ I have decreased my meat consumption a lot!

After the horror it was time for some better looking and smelling experiences, such as (exotic) fruit, vegetables, flowers and cheese. I mean, there was cheese as far and as high you can see, in every shape, size and type. Like you’ve landed in cheese heaven. Yeah! 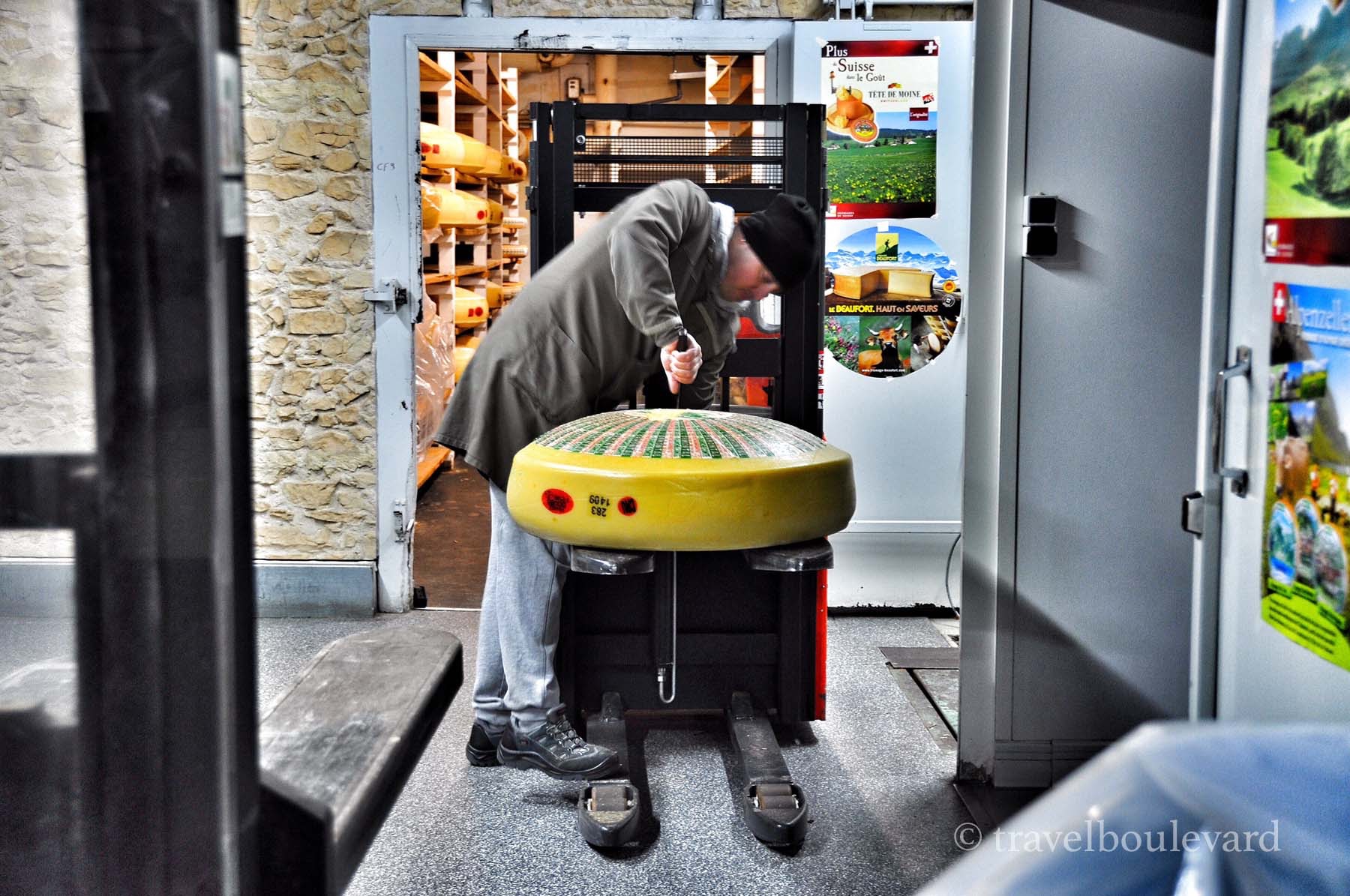 If you want to enjoy a guided tour like this yourself: it’s well worth it. But do realize you need get up very early and the meat section can be quite confronting if you have a sensitive stomach 🙂

Epilogue: about Michelin star chefs and a posh party at the town-hall

An epilogue in a blog-post? Why not? I absolutely want to report about the top event of this press trip, but unfortunately for you this was a one-time-only event so it doesn’t really count as a to-do-tip. And just admit it, epilogue sounds pretty cool, right? 🙂

What was so special about this event? Well, we received a personal invitation from the mayor of Paris to attend a special ceremony at the Hotel de Ville (the city hall of Paris). During this ceremony  84 Michelin star chefs from Paris were honored by Mayor Anne Hidalgo, because of their high-standard culinary contribution to Paris. And the biggest name among these 84 chefs, was…Alain Ducasse, yep…the star in whose school we previously sharpened up our kitchen talents.

And is there also something to say about the Hotel de Ville? Yes, it is very beautiful, full of magnificent painted ceilings and golden ornaments, a feast for the eye.

Do you want to visit the Hotel de Ville? You can: there are organized tours (in several languages) available, so just do it (and if you’re a bit lazy: there’s also a virtual tour available online: next.paris.fr).

Wondering where I’ve spend my nights during this three-day trip? Check out this post: Staying at the Paris Molitor: I slept in a swimming pool. Yep, I certainly did……🙂

(Disclaimer: This blog post was made possible by the French tourist office. My opinion is of course entirely mine.)